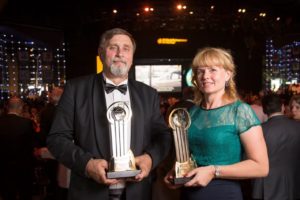 through the innovations, jobs and economic growth they create, all of which help to build a better working world.

2015 Entrepreneur Of The Year winners from Slovak Republic, MicroStep´s CEO Mr. Alexander Varga and CFO Mrs. Eva Stejskalova, proudly participated in the event and represented Slovakia in the international gala.  “At the WEOY world finals we had the opportunity to meet successful entrepreneurs from all around the world and chat with numerous country winners.

We established contacts with businessmen and women from other countries, which may help to further develop our business in the future as we plan to expand to other markets,” Eva Stejskalova conveyed her feelings immediately after returning from Monte Carlo.

Alexander Varga shared: “The competition was very strong and just the fact that we made it into this environment, is a success.

Amongst the finalists were many high-tech companies. Some of them have huge turnovers and operate in larger markets than MicroStep. It is a great inspiration for us for the future. ”  The World Entrepreneur Of The Year (WEOY) Award was created by EY to recognize the significant accomplishments of entrepreneurs around the world.

The winner was announced at a ceremony on the evening of Saturday, 6th June at Salle Des Étoiles, Monte Carlo.

More on our Products